Hand crank generators aren’t as popular as other power generator solutions. It’s even likely that you’ve never seen one. However, they can be a valuable buddy when your phone runs out of charge in the wild, or your torch battery goes flat. A hand-crank generator would allow you to recharge the battery, so you can continue using the phone or torch. In fact, some hand-crank generators are powerful enough even to charge tablets and standard laptops.

If you’re in the market for a portable power solution that you can bring on your travels with ease, read on to find out why a hand crank system could be the ideal solution.

A crank generator is a device that generates electricity when the user cranks a lever or pedal attached to the device. Hand crank generators are called so because they are small enough to crank the lever with one hand.

They originated in the 60s and were initially used to help the military generate power without grid power. Indeed, most hand-crank generators are still found within the military and self-protection industries. Civilian-use units cost a few hundred dollars.

Hand crank generators are typically portable and can power various travel devices that don’t consume a lot of electricity. In addition, many models today have a torch and one or more USB ports so you can charge your devices with ease.

The most significant advantage of hand crank generators is that they rely 100% on human strength. You just crank the handle, and the generator will produce enough electricity to power your devices. It means that you don’t have to worry about fuel, as with diesel and gas generators, or solar, as with solar-powered generators. For this reason, you can use the hand crank generator prey much anywhere.

How so? It’s straightforward. Crank generators use an in-built dynamo. Dynamos are devices or machines designed to convert mechanical energy into electrical energy. It makes direct current using electromagnetism.

An elementary dynamo comprises a spinning coil placed between two permanently stationed magnetics. The coil, made of conducting wire, is positioned between the north pole of the first magnet and the south pole of the second magnet.

Imagine two magnets on the left and the other on the right of a conductor wire coil to understand better what goes on within the dynamo. The left magnet has the north pole inward (closest to the coil), while the second one has the south pole facing inward.

The height of the wave represents the strength of the induced voltage and depends on the magnetic field’s strength, the number of loops on the wire coil, and how quickly the coil rotates (number of rotations per minute).

How Does it Generate Electric Power?

The spinning coil within the dynamo connects to an electrical circuit that gets power via a commutator. The electrical commutator is a rotary electrical switch in selected electrical motors, such as the dynamo, that periodically reverses the current direction between the motor and external circuit, effectively preventing the dynamo voltage from changing between negative and positive. It also serves as the terminal for the rotating coil.

Let’s begin with its function as the terminal for the rotating coil. The standard dynamo commutator comprises two half-cylinders of smooth conducting material, separated by a small gap. Each half is attached permanently to one end of the rotating coil. This way, the commutator rotates with the coil. However, pressing against the spinning commutator are two “brushes” that serve as terminals to capture electric current and transfer it to the external circuit. Dynamo brushes are often made of soft conductive material, such as carbon.

So, how does it prevent the voltage from alternating between negative and positive? This also has something to do with the brush slides. The two brushes are designed such that each slides along the two halves of the commutator. But, more importantly, they switch sides as soon as the voltage in the coil reverses polarity. This allows them to put out voltage at the same polarity, typically a positive polarity.

The dynamo ultimately produces clean direct voltage. The process involved in converting alternating voltage to direct voltage is known as rectification. The power from the dynamo is then stored in an integrated battery for later use.

Nearly all hand-crank generators have a few output ports where you can connect your devices. For instance, the majority have one or more USB ports and an electrical lead. In most cases, an internal charge controller helps protect your devices from current surges.

In the end, the amount of power generated by and large depends on your efforts. The longer and faster you crank, the more power you can produce. Most standard units can put out up to 5V for 1.5rpm (revolutions per minute) and about 6.2V at 2rpm.

Factors to Consider When Shopping for a Hand Crank Generator

If you feel that a hand-crank generator is the right solution for your portable power needs, we recommend the following considerations to choose the right one.

Once you know how much power you need, go through different crank generators, checking their power ratings. The biggest crank generators can produce 400 watts per crank, enough to power a television and speaker system. However, the smallest models can only provide 5.0 watts per crank, which can only power a flashlight. Which one best suits your needs?

Although hand-crank generators aren’t meant to run large appliances, this doesn’t mean anyone would be happy to replace them every few weeks. Ideally, you want a unit that’s durable enough to last many years. You also want a hardy generator that can withstand the rigors of the intended application without breaking or getting damaged.

To this end, check each unit closely to determine the build quality. If you intend to use it for camping and hiking, you want a unit that can take a beating – not break apart as soon as it drops to the ground. However, if you’re buying one for use at home, a plastic model may be acceptable.

Portability is the other important consideration. All hand-crank generators are small enough to bring along wherever you go. However, the level of portability varies from one unit to the next. Whereas some weigh only a few ounces and are small enough to fit into the pocket on your jacket, others are up to a few pounds heavy and too large to carry in the pockets.

The best way out is to consider your needs and select the best size and weight based on the intended application. For example, if you want a more powerful unit, then you can compromise on size and weight. However, if portability is at the top of your priority list, then a tiny, lightweight unit is a better fit.

Finally, consider whether a unit that can draw power from alternative sources would be a better fit. For instance, many crank generators also double as solar generators. Whenever you’re in a location with plenty of sunshine, you can position it somewhere to recharge from the solar radiation. At the same time, you can crank it during cold conditions or at night when there’s no sunshine.

Indeed, some are even rechargeable, effectively functional as power banks. You can charge the unit from the home’s grid outlet when you’re home and bring it fully charged on your trips. This way, you only need to crank it when the battery runs flat. Alternative power capabilities make a crank generator even more versatile.

This is a short list of 3 new products available on Amazon: 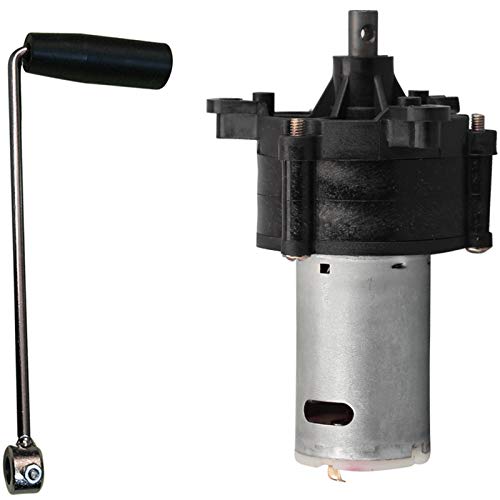 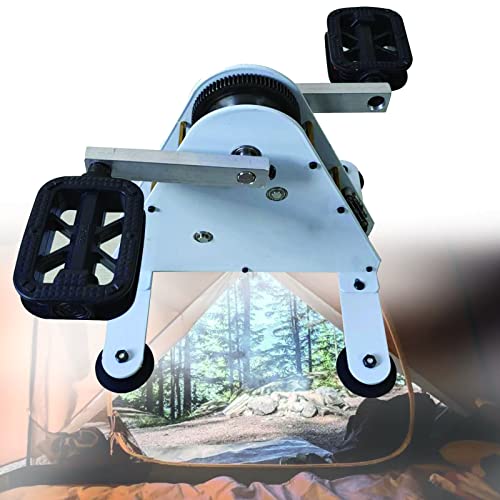 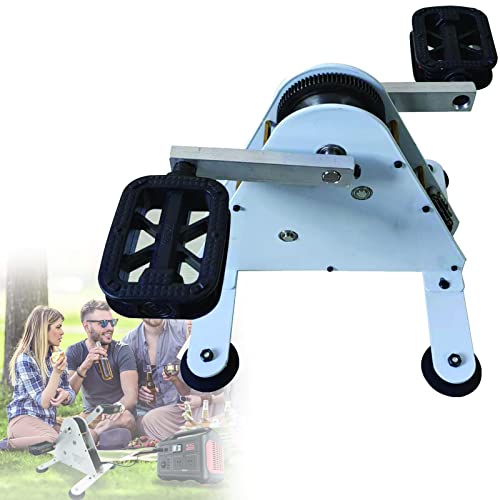 How to Make a Hand-Cranked Generator

Building a hand crank generator is relatively simple, assuming you have all the necessary materials. Here are the basic steps:

That’s it! You can now use your hand-crank unit to generate DC power.

How much power does a hand crank generator produce?

The average power output for a hand crank generator is between 1-watts to 100-watts. The amount of power a unit can produce will depend on the model and make of the generator. Powerful versions can produce enough power to charge multiple devices and still provide lighting during an outage or camping trip.

Are hand crank generators worth it?

Yes, hand-crank generators can be a great addition to any emergency preparedness kit. They are relatively inexpensive and can be a lifesaver in a power outage. Hand crank generators can also be used for camping, boating, and other outdoor activities. Plus, they are easier to carry and expense-free compared to other portable generators.

Can a hand crank generator charge a battery?

Hand crank generators might not be the trendiest tools. However, they can be invaluable in certain circumstances, such as traveling, hiking, and field research. Therefore, you should strongly consider getting one.

An Introductory Guide to Hand-Crank Generators